ASN Entertainment, LLC
Meet Sara Clayton in this ASN Lifestyle Magazine story about her journey through life as a Playboy Model and Lifestyler.

Recently at a little swinger club, in a conversation with some well-known friends and some acquaintances, the question “Where’s the craziest place you’ve had sex?” came up. Being Miss-Rule-Follower, I had absolutely no answer — as in none. Not exactly the riveting answer you’d expect from someone who frequents sex clubs… I eventually said, “in the steam room at Hedo 3,” which was the first place we had ever done anything semi-public (being that it had one whole wall, which was a window.) My acquaintances were somewhat disappointed; those who really know me weren’t surprised at all. Some other answers included fucking while driving and blowjobs on the side of the PA/NJ Turnpike (to which my hands started sweating and my speech stammered even at the thought). One of the women assured me that it’s fine; she would never be able to pose nude in front of strangers — something I do on a regular basis.

Growing up, I was the kid who was always third in line when organized by height (hello Catholic grade school), wore Coke-bottle-thick glasses, was sometimes cross-eyed, and was always doodling. One of my absolute favorite things to do was drawing with my stencils, as I have no aptitude for freehand drawing. When not doing that, I was either re-reading my dinosaur books or literally clotheslining myself on my bike — crossed eyes makes depth perception tricky…

To a certain extent, I’m still that person, just slightly taller and with both eyes looking in the same direction thanks to surgery!

Even as a kid, I was somewhat introverted; I found other kids to be pushy, rude, or just mean. It was much easier to be by myself, not having to explain why I had bifocals or have someone point out when my eyes went weird. Now I’m somewhat of a weird hybrid introvert. I’m good at being social for small periods, but then need to retreat and be on my own to sort-of recharge!

As luck would have it, at 21, I found myself in love with a dashingly handsome, sweet, kind, and intelligent man who was even more introverted than myself! Fast forward four years, and we were building a house and getting married! We were a completely typical early-to-mid-twenties couple, up until a couple of nights before we were married. We went to a strip club we were starting to frequent, and it was Amateur Night. At the begging of the house-mom (and the eager eyes of my then-fiancé,) I finally signed myself up to compete. The little shy little white girl apparently had a few moves! …And won money! …And a gift certificate for a tattoo parlor!

On our honeymoon, we were in the pool recounting how crazy that was and trying to figure out what to do with the tattoo certificate. I really had no interest in getting a tattoo since I was convinced I’d probably hate it in a few years. Piercings seemed like a pretty reversible thing I could try. A couple of months later, I was sitting in a tattoo chair getting my nipples pierced… In front of my now-husband, who was white as a ghost when he saw the size of the needle being used (ha-ha)! 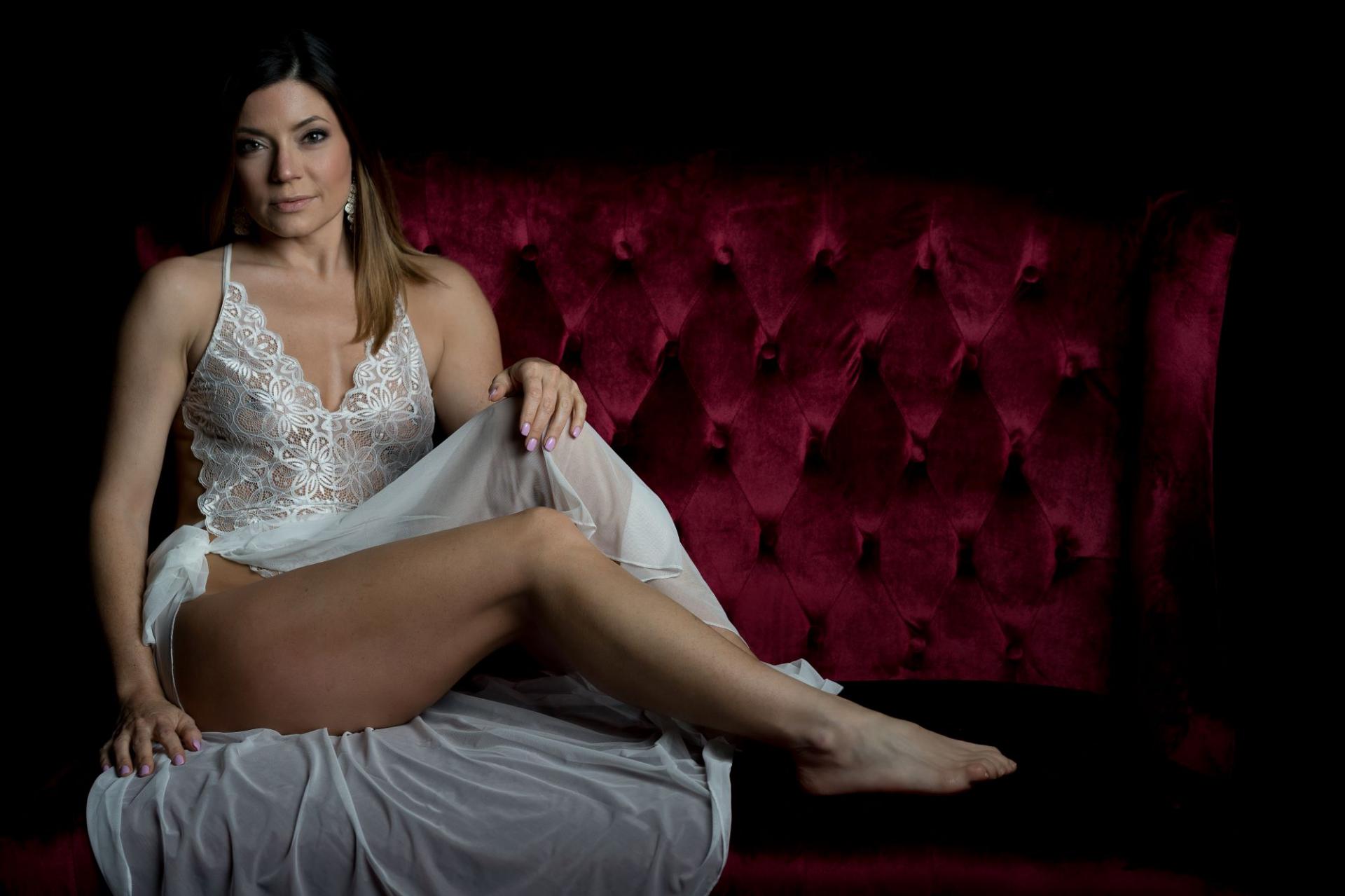 Being young and newly married, we had little to no money and eventually saw amateur nights as a convenient way to try to bring in some extra cash. I was getting a little more confident in my “dance” skills, there was a fun little rush of being nude in front of strangers, and the nipple piercings were a shock to the crowd that helped me secure a winning spot every time I competed. We were doing this off and on for about three years when my husband saw an advertisement in Playboy for regional casting calls. He brought this to my attention and suggested I try out, as one of the upcoming dates was only two hours away. “I get this magazine all the time; there’s no way you wouldn’t be able to do this. You’re just as beautiful as these women, plus do you have any idea how awesome it would be to open this up and see my wife?!” It took quite a few more encouraging conversations, as I wasn’t seeing it myself.

I attended a casting call for Playboy in Philly in 2008. It was the day the Phillies won the World Series, and I was ready to puke in a hotel in center-city. All the other women there were tall with breasts much larger than mine, makeup and hair much more professional than mine. These women were all so put together. All-in-all it turned out to be a very positive experience! Playboy staff through and through could not have been any more professional or comforting. They actually made it easy!

Nothing came of that casting call from Playboy itself. It would take another casting call a couple of months later in NYC for me to be picked up and booked for publication — but I was able to use the professional photos I received to create an online modeling profile and start working with other photographers. My husband and I would spend our weekends off together driving 2–3 hours in one direction for photoshoots. I’d be learning how to pose, how to do my makeup and hair, while he was talking to the photographers, and learning how to photograph.

All this while I was becoming more comfortable with being nude, posing nude and my angles in front of the camera so that when Playboy did call and wanted to publish me, I was ready! To date l I’ve been published in three Special Editions magazines and have multiple pictorials available on Playboy Plus. I’ve been able to use my experience to channel my focus into my own website with uncensored images, for which my husband and I create most of the content together.

Working together in this capacity has made us able to bring our skill sets to multiple lingerie and swimwear companies as well as Caribbean all-inclusive resorts for marketing. While staying at Temptation in 2010, we approached management to ask if they would use a Playboy-published model in their marketing campaigns. Management set up a photoshoot with both my husband and their photographer, the photos being used in their emailings and on their website. We built a wonderful working relationship that translated to us taking part in marketing for the first few months of Desire Pearl's opening in 2012. 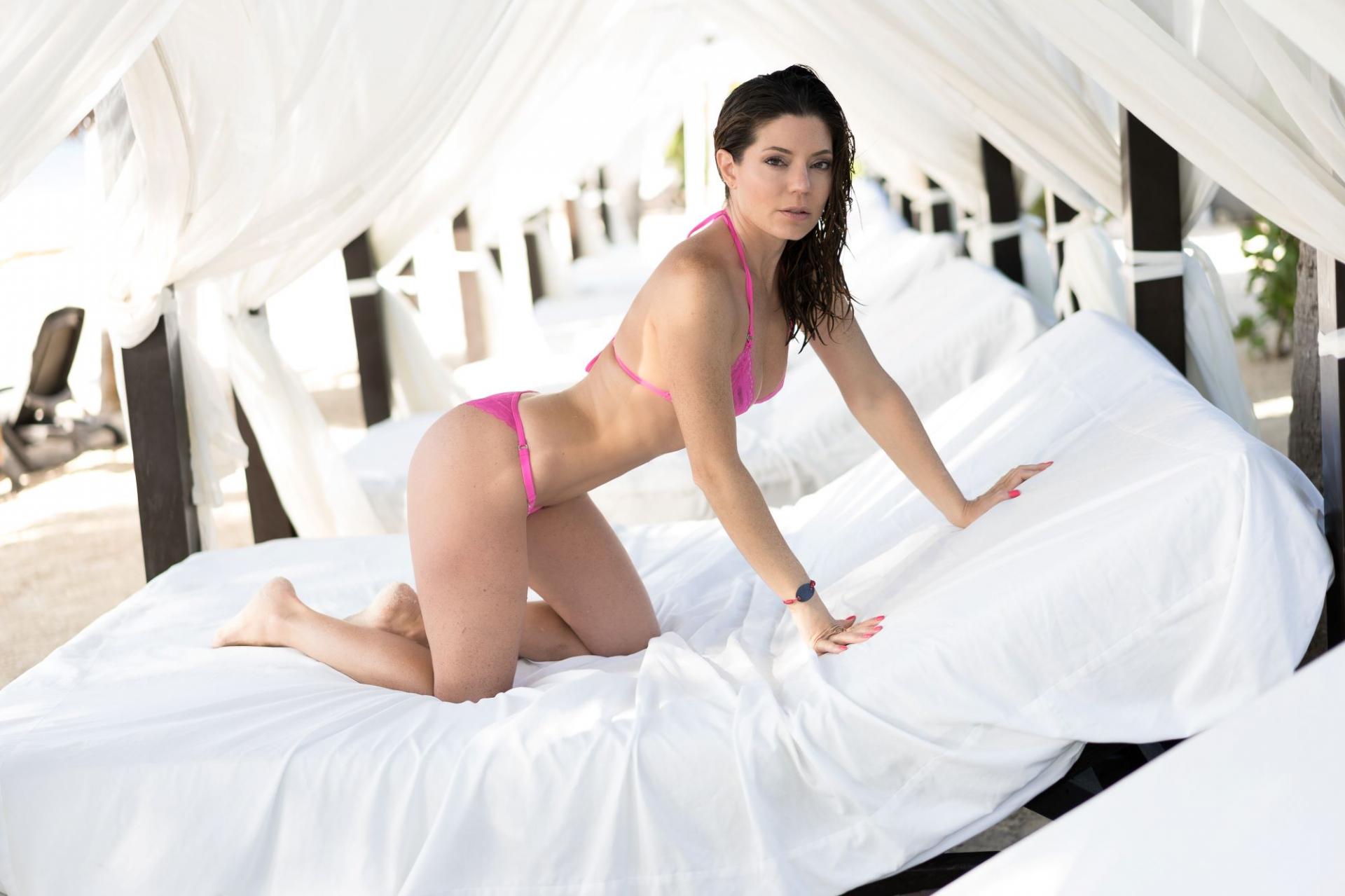 Desire Pearl was our first real experience being exposed to the “lifestyle.” We were perfectly happy being nude and were looking forward to that aspect of the property! While we were here for our first stay, we found ourselves being asked if we were “in the lifestyle.” Neither of us had a clue what this meant; we eventually started answering that we were exhibitionists… which was true! We had no problem performing in front of others, but that was about our limit.

One afternoon in the beautiful Desire Pearl Jacuzzi a British woman overheard our nervous attempt at answering this “lifestyle” question and asked if she could pull us aside. She spent about 40 minutes explaining everything to us, including soft-swap, full-swap, side-by-side play, and stressed consent, consent, consent. “The woman rules everything.” She stated this time and time again.

After our crash course vacation at Desire, we continued to attend the beautiful resort both in working and vacation capacity through today. We didn’t quite get it for a while but eventually did start to make amazing connections. Eventually, we did connect with another couple in which we experimented with pushing the boundaries… and it was AMAZING. My husband and I were communicating like never before. We obviously had tons of conversations about what we had witnessed while at Desire but never had this personal experience to draw upon.

Over the years, we have started attending small clubs closer to home and have found that the LS crowd is full of amazing, wonderful, and earnest people. Lifestyle friends really do put vanilla friends to shame as far as being loyal, understanding, and trusting. I personally have never found women easier to talk to and confide in outside of this realm! 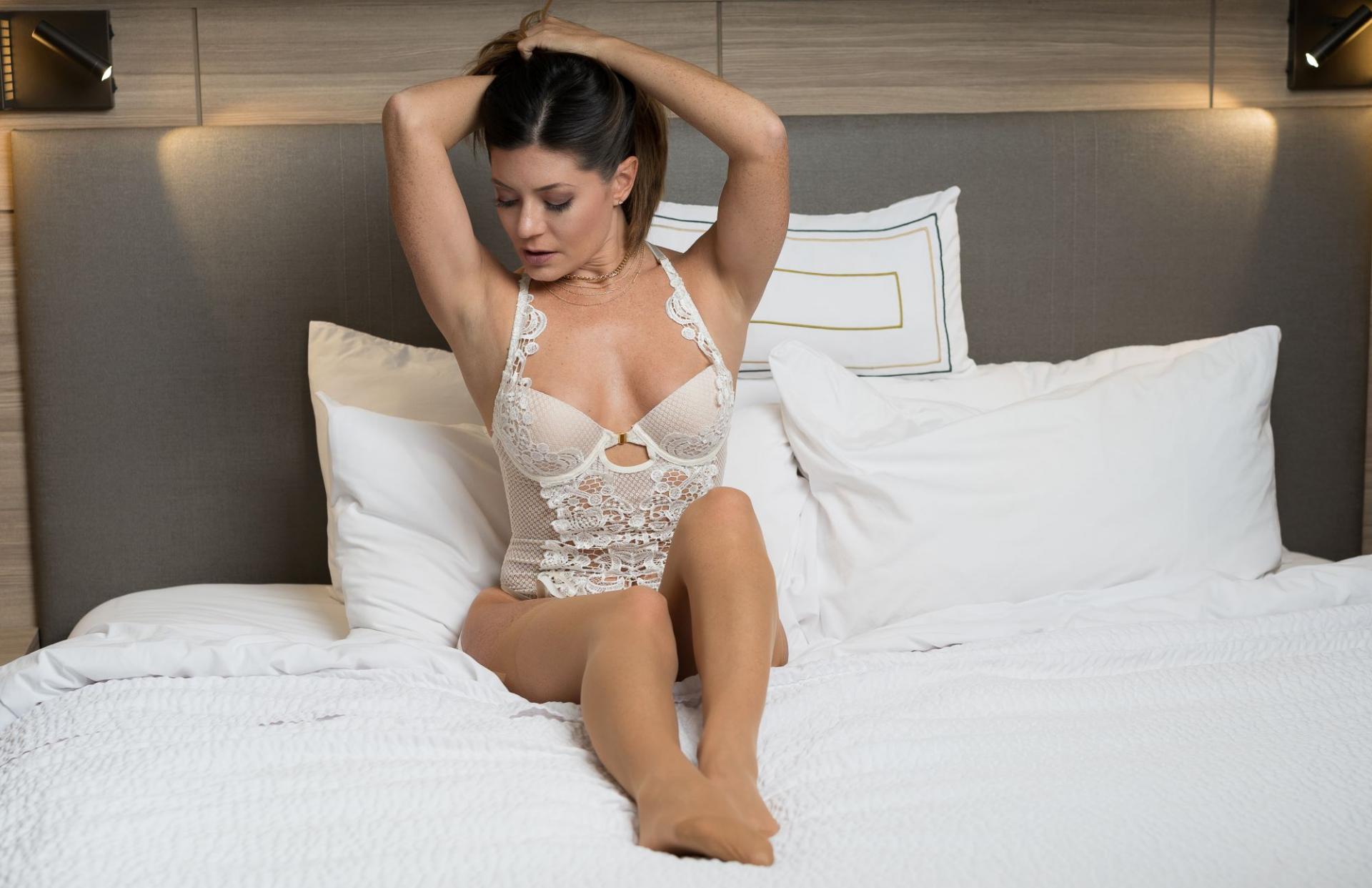 Based on this realization of how supportive and honest women in the LS are and how transforming a place like Desire can be for a relationship, I created a private FB group for women in June of 2018. “Ladies Love Desire” has proven to be a wonderfully supportive resource for women who are interested in what a place like Desire and even the Lifestyle have to offer. The group has become this culmination of information and questions concerning not only Desire or LS related questions, but also body image, women’s and sexual health. There are all kinds of discussions in the group, some LS-inspired, others are women looking for advice regarding sensitive gynecological issues.

Perhaps even being an introvert has somewhat leaned to nude modeling and eventually being active in the Lifestyle to be a little easier than it would have been otherwise. There isn’t a terrible amount of friends to try to explain our positions or activities to, or defend against, in somewhat of a lucky sense! I’m starting to realize that being able to hang back and take in others has, in a way, helped me understand what women need in this type of niche group. 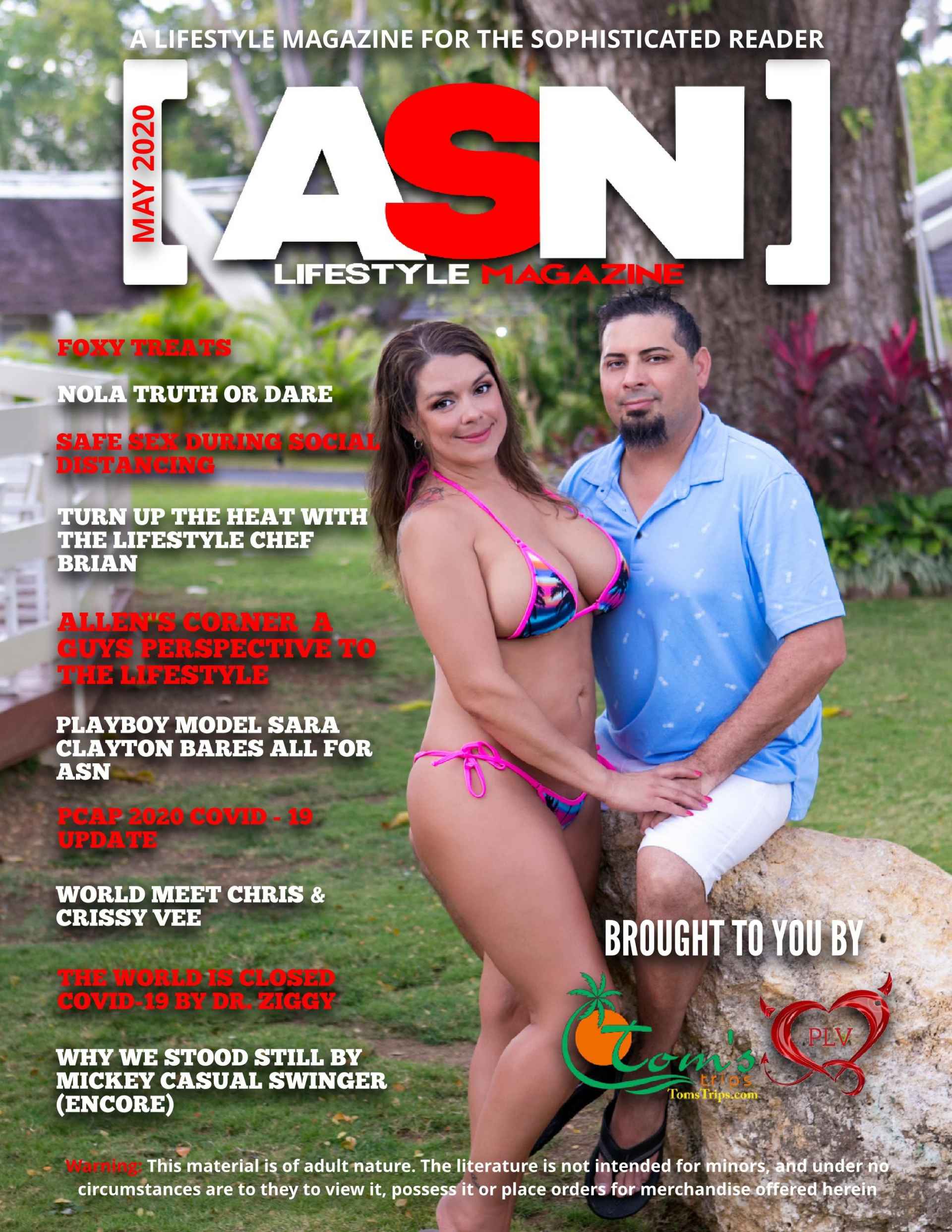 This story originally appeared in the May 2020 issue of ASN Lifestyle Magazine.

RELATED ARTICLES SAME AUTHOR
Tips for Swinger's Parties (and Newbies)
Maddy V
The most effortless and effective way to meet other swingers is to become a member of SDC.
Maddy V
Introducing Swinging Downunder on SDC!
Wanderlust Swingers...
Get to know the Aussie power couple behind Swinging Downunder.
Wanderlust Swingers Podcast...
Let’s Go! They Just Want to Talk...
Member Stories
This couple went to a few hotel meet-and-greets and finally found the couple that helped them dive into the world of swinging. Worth the wait!
Member Stories
SHOW MORE