The Travelling Goddess
Dance party anyone? The SDC World Party is a grand affair and hands down, totally lives up to its name.

It was awesome to be part of the SDC World Party in Utrecht! First of all, The Netherlands at this time of year has a lot to offer. The city of Utrecht is an adorable place to visit, to walk around, to shop at all kinds of artsy boutiques, and certainly to enjoy all kinds of interesting food items! Oliebollen anyone? These yummy balls of fried dough with raisins are topped off with a generous helping of powdered sugar. A seasonal treat in The Netherlands and nothing short of a party in your mouth! My favorite place to visit was undeniably The 'Winkel van Sinkel' where good coffee (and whipped cream) plus a nice selection of sandwiches and pastries are served up with a happy smile in an exceptionally gorgeous building inside and out. Amsterdam is an easy train ride away, and a visit to the Red District always a guilty pleasure. Anyway, before I knew it, it was already time to get dressed for the party of the year — and what a party it was! 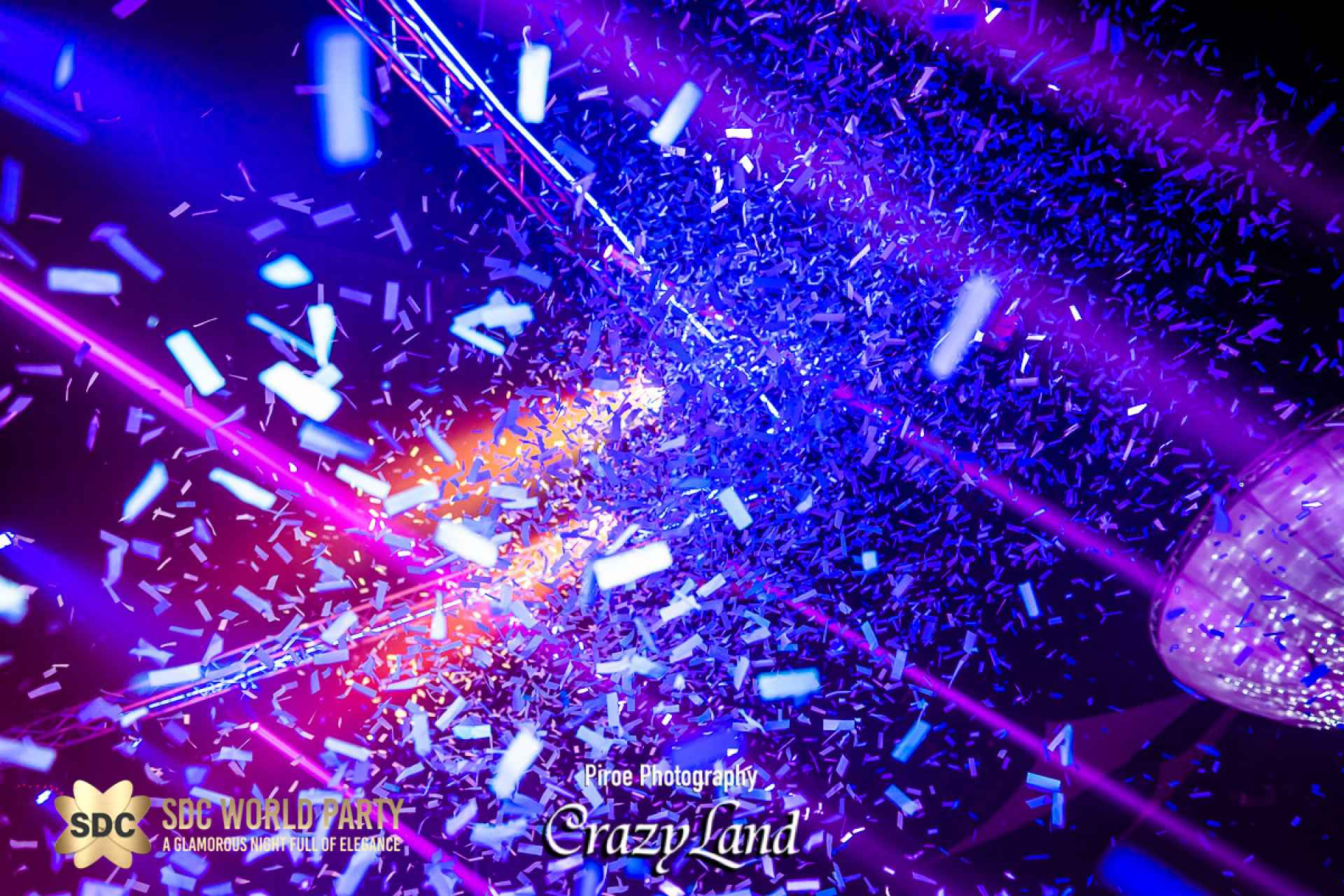 The magical hour when the doors to the SDC World Party event in Utrecht were slated to open sesame.

It was dark and very chilly but thankfully dry outside. The anticipation all around was palpable, the air filled with excitement while impatiently waiting for the go-ahead. I thought it was great that the SDC team was well prepared with hundreds of umbrellas at the ready, just in case the weather gods would decide differently. Just those kinds of details make things all the more pleasurable. Thankfully the umbrellas could stay where they were! It was a sight to be seen, thousands of people waiting in line to get in and ready to start the party! It was lovely to see that younger guests were flocking to this year's party as well, so all in all, a great mix of those in their 20s, 30s, 40s, and 50s. All dressed according to the theme, so lots of black and red to emulate Fire and whites and icy blue to give homage to the Ice. 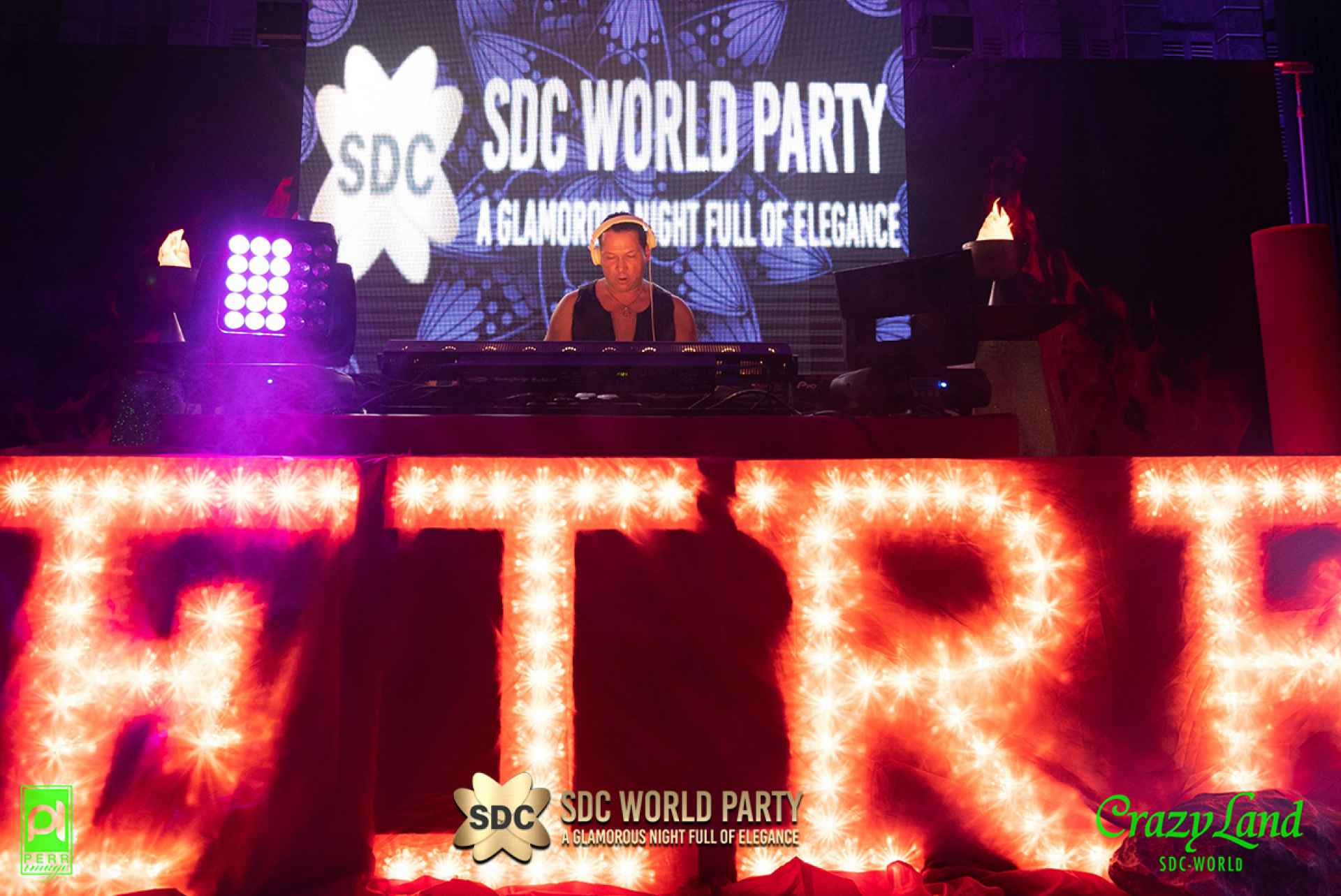 The big areas were in theme and absolutely spectacular. The Fire area was dressed in gorgeous reds with lighted red swags plus enormous dragons hanging from the ceiling. That certainly sparked my fire... The Ice area was super cool with big lit up white balls, classy white decorations all around plus a huge oversized and fun plushy polar bear dangling from the ginormous chandelier in the middle. The VIP deck located on an elevation in the Ice area was also decorated to the ninth and well equipped with an awesome bar, seats, and tables. A welcoming pink bubbly was served in elegant flutes by ditto lovely ladies in pink, and the fruit and canapés kept coming all throughout the night. Delicious! 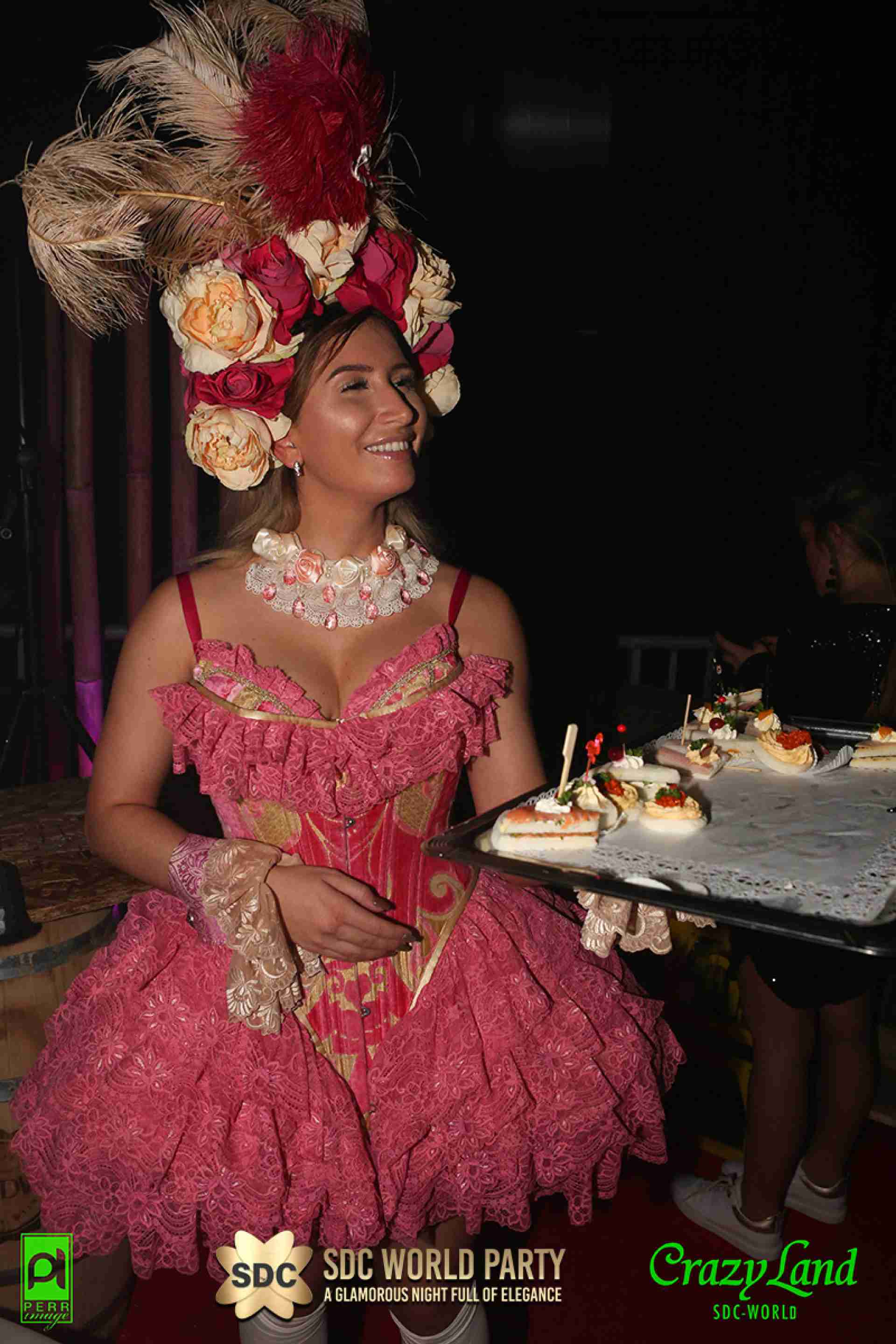 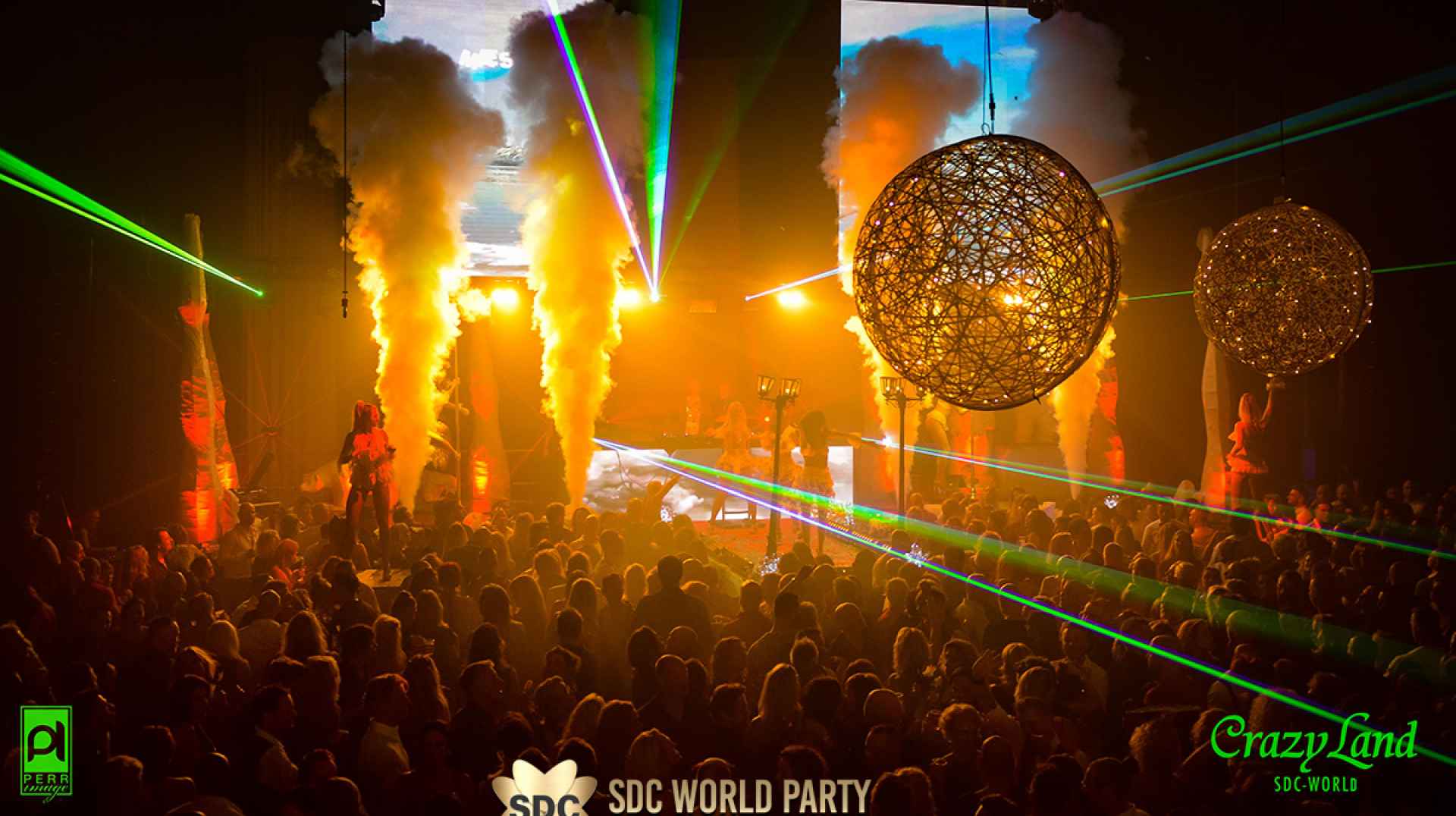 All the DJs were excellent, and with a fresh one taking over the reins every hour in each area, those beats never got stale! I have to give the special effects a special mention, as the double-layered lasers and CO2 canons brought the visuals into a new dimension. Both big party areas were jam-packed and the cool play area, well, needless to say, but that was well-visited throughout the night. It's safe to say that this evening of Fire & Ice did possibly melt the polar caps a bit with all those hotties dancing, flirting, kissing, and then some! There were — and yes you are reading this correctly — actual fireworks a few times. Super noisy, but awesome! As I was looking down from the VIP deck at that moment, all heads just shot up in surprise to watch this unexpected bit, how fun! The SDC “partners in crime,” like Crazyland and the slew of other hosts, it’s a high five and kudos from this goddess for a job very well done!

Epic is as Epic does! 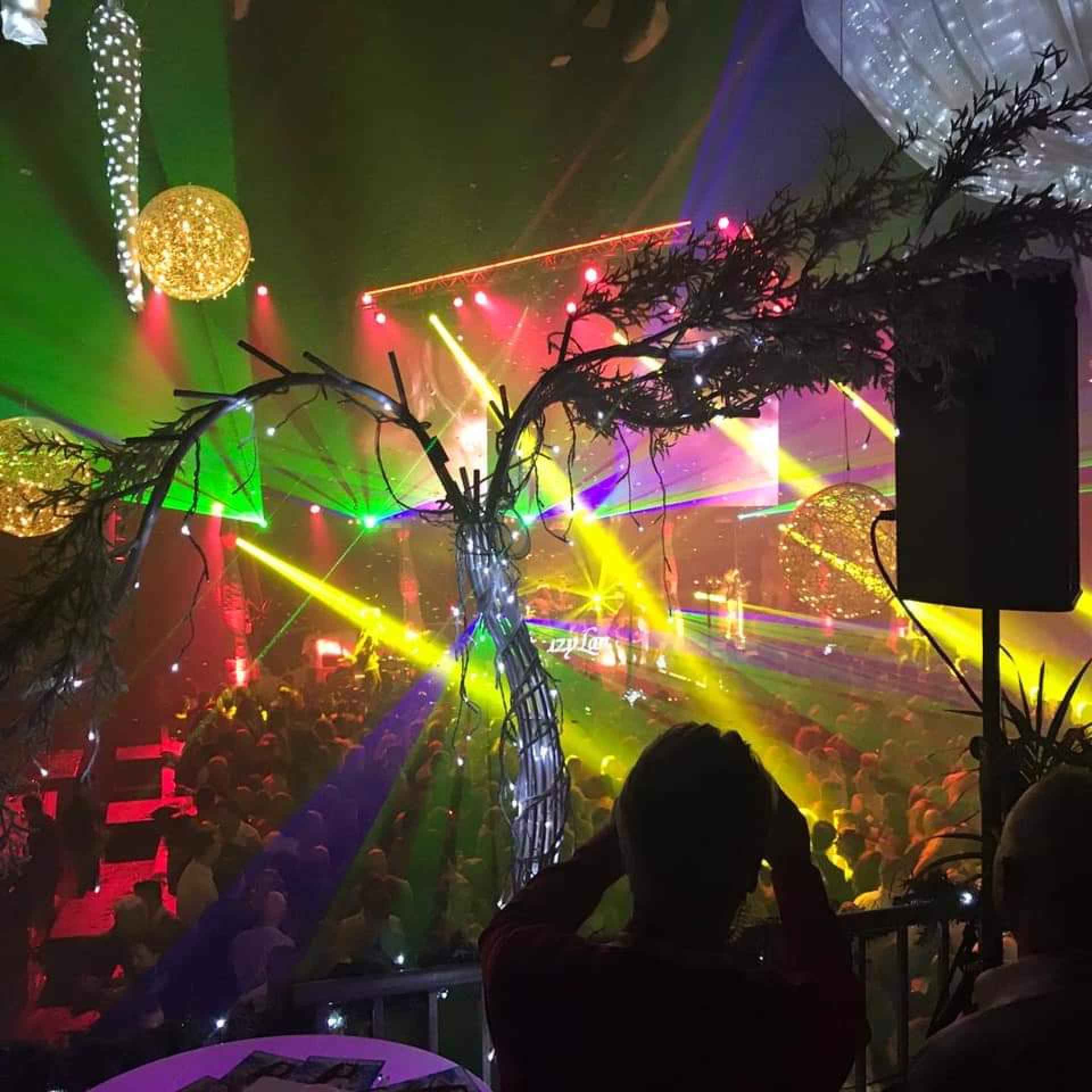 The international aspect of this event was a given as I was told that guests from at least 25 countries were counted and present! As the evening flowed into the night, the temperature inside rose, and more than a good time was had by all! The last sexy visitors, including this one, kept it going till 5 am, heading almost right into breakfast! What a gem of a party! And one thing is for sure — I’ll keep my eyes peeled for the next SDC World Party announcement to get an early grab on those tickets. I am looking forward to coming again and again at this epic party next year!

Years ago, I was stung by the Wanderlust (the first documented use of the word occurred in 1902 and no, it wasn't me) bug. Wanderlust has different meanings in Etymology, Sociology and Psychology. 1. ""seeking unity with nature"" 2. ""strong desire to travel"" 3. ""an intense urge"" to experience the unknown, confronting the unforeseen to touch upon the unfamiliar. Guilty as charged, since this sexy trinity describes me to the T with a resounding yes, yes and yes! Desire, Lust and Travel is an intoxicating combination indeed! I travel a lot within the most beautiful of Lifestyle circles. A world shrouded in mystery and seduction and for those in it, mostly a hidden part of their public lives. How delicious, it's like going through life with an aroused mind lingering on the times you can shed your power woman office outfit for a sexy mask and irresistible lingerie. Much like an inserted sex toy that is being controlled by your partner at will, yet no one's the wiser. It's all part of the immense attraction to lifestyle circles which are growing explosively, so when you read my bits, reader discretion is advised...or not!
SHOW MORE ...
0 Comments
SHOW MORE

RELATED ARTICLES SAME AUTHOR
Women Wanna Know: How to Be Open During a Pandemic
ASN Entertainment, LLC
Taara Rose from Sex Interrupted shares her COVID-conscious advice for people practicing consensual non-monogamy.
ASN Entertainment, LLC
How to Talk to Your Partner About Sex
Sex on Your Terms
Communication essential in any relationship, but there are certain topics that need to be addressed before entering CNM dynamics.
Sex on Your Terms
American Sex Podcast Episode 46: Sunny, Ken and Lee Lee - Our Open Marriage
Sunny Megatron
If you've ever been curious what open marriages are like behind closed doors, this is the episode for you!
Sunny Megatron
SHOW MORE