Mating Season is OUT NOW!

The time has come! 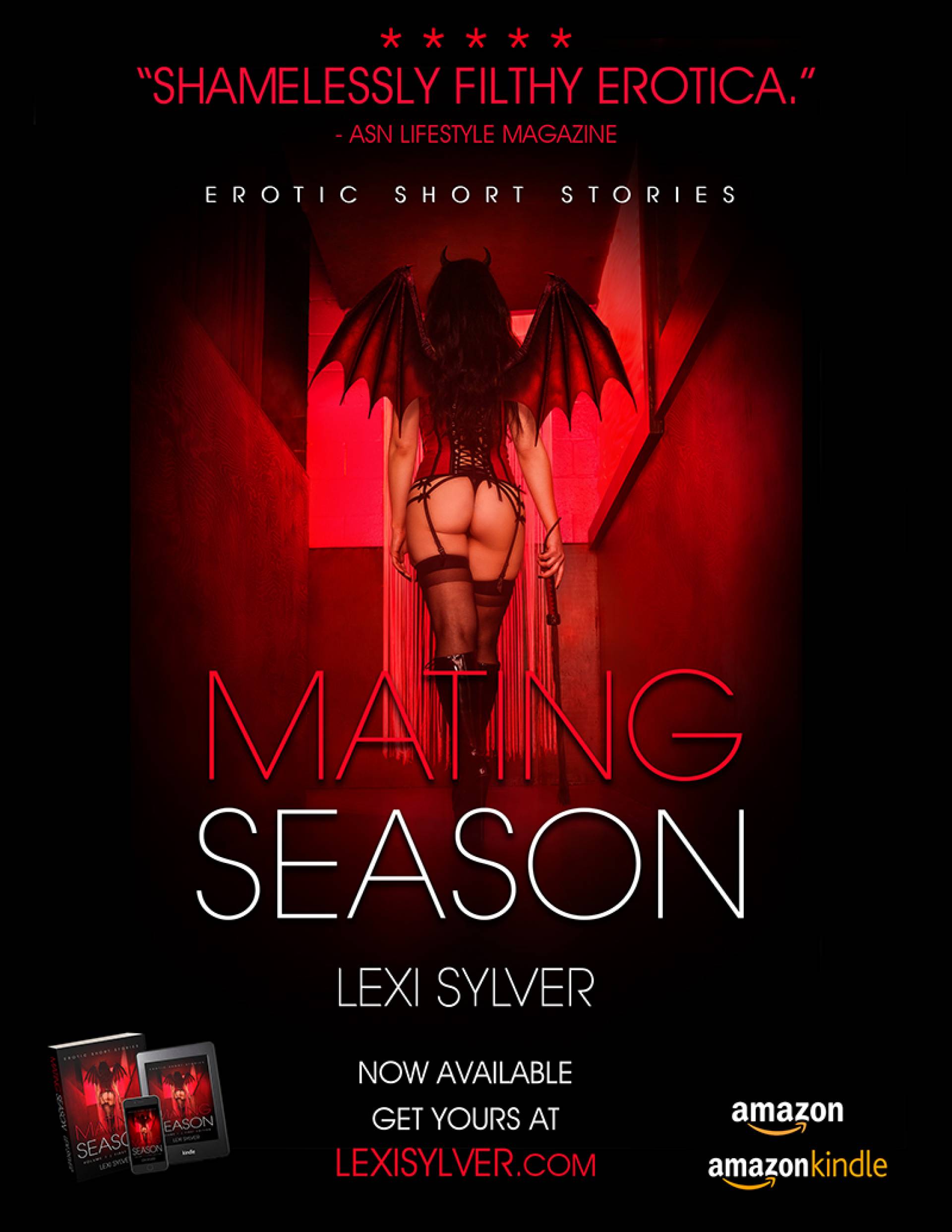 I'm thrilled to finally be able to share my smut with you!

Mating Season has been in the works throughout most of my adult life. Did you know that when I was in my late teens, I published a very primitive version of Mating Season?

My friend Vince created the cover, which was a gorgeous graphic rendering of a curvaceous woman with long curly hair, lying on a bed of silk.

I chose about ten or so stories I'd written, got it printed and bound at a local copy store, and made only about 10 books to give out to my closest friends. I still have a copy of it!!!

And now, you can get a copy of the first OFFICIAL volume of Mating Season, now available in paperback and ebook formats!

"Through the open upstairs window, he saw a naked woman with luscious curves, her long, straight blond hair flowing between her ample breasts. His cock sprang alive in his jeans. He couldn’t take his eyes off her. She was completely naked, sitting on the window seat sideways with one knee up, her hand between her sun-kissed thighs."

"Luca wondered who else could see her but then realized there was a lake behind their house, blocking most – but not all – potential peepers. Did she even know he was there?"

With Mating Season, I want to empower others to “open your mind to new things and embrace your fantasies and your authentic self, rather than repressing them or feeling shameful about them,” as reads in my book’s foreword. While some authors are private about their identities and personal lives, the front cover of Mating Season features a photo of myself from behind, wearing lingerie and wielding a flogger.

"Lexi Sylver is the Montreal-based erotica author of Mating Season and All the Queen’s Men. She enjoys having a kinky and unconventional lifestyle and sharing her stories and experiences with others. Lexi hosts and produces SDC.com’s sexuality podcast, Seek, Discover, Create with Lexi Sylver. As an entrepreneur, advocate, educator, public speaker and coach for consensual non-monogamy and the swinging lifestyle, she journeys the world to attend travel events and conferences. She regularly contributes articles about sexuality and relationships to Pornhub’s Sexual Wellness Center, ASN Lifestyle Magazine, SDC.com and her personal blog. Her mission is to promote empowerment and education by guiding you to shamelessly explore your Lexuality."

Lexi Sylver is the Montreal-based erotica author of Mating Season and All the Queen’s Men. She enjoys having a kinky and unconventional lifestyle and sharing her stories and experiences with others. As an entrepreneur, podcaster, advocate, educator, public speaker and coach for consensual non-monogamy and the swinging lifestyle, she regularly contributes articles about sexuality and relationships to Pornhub’s Sexual Wellness Center, ASN Lifestyle Magazine, SDC.com and her personal blog. Her mission is to promote empowerment and education by guiding you to shamelessly explore your Lexuality. Find out more at LexiSylver.com.
SHOW MORE ...
0 Comments
SHOW MORE

RELATED ARTICLES SAME AUTHOR
5 Reasons to do it Yourself
Dr. Jess
Touching yourself for sexual pleasure can be good for you!
Dr. Jess
American Sex Podcast Episode 12: Dr. Joycelyn Elders Interview - Former Surgeon General
Sunny Megatron
Ken and Sunny talk with Dr. Elders about sexual health; pleasure inclusive sex ed in church; transgender children; the legalization of marijuana; Waffle House vs. Denny’s; #MeToo, and more.
Sunny Megatron
DIY Sex: Hot Tips for Self Pleasure
Dr. Jess
I cannot think of a better project to work on with your very own hands than a little self-pleasure.
Dr. Jess
SHOW MORE

Erotic Literature: Sex, Taboos, and Empowerment
Lexi Sylver
Author and editor Rachel Kramer Bussel waxes poetic the current state of erotica and its impact on sexuality.
Lexi Sylver
From Monogamy to Polyamory: Easing the Transition
Lexi Sylver
It seems like a massive jump for your mindset and lifestyle! Listen here and learn how to make going from mono to poly as smoothly as possible.
Lexi Sylver
Desire Mapping and the Power of Sex Stories
Lexi Sylver
Is it "just sex?" While we can have "just sex," there is so much more to it. Our sexuality is a big part of us, and it's multifaceted — as Dr. Jaime M. Grant said, what is your story?
Lexi Sylver
SHOW MORE